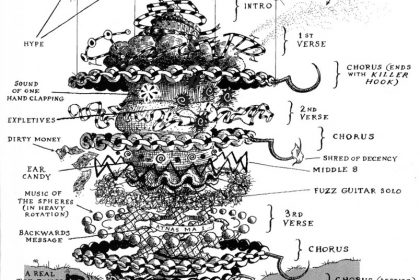 And he lay gasping, pain slicing through his left side piercing muscle bone and sinew to a higher state and as he gasped he silently chuckled a gasping wheeze a sputum speckled hack a snort of agonized joy as it hit him he GOT Cecil Taylor! The cacophony of sound enveloping him gave way to a subtle latticework of tones and color floating sailing shifting through a malleable mass of space and time oozing with primordial essence of all that danced to the axiomatic spiral of ongoing creation metastasizing towards a state of the crystalline beauty of a JG Ballard hallucination. If this was death he would rush headlong to its tumbling rhythmic embrace.

Rolling to his back he gazed to the ceiling, the white of it’s broad expanse disintegrating to shimmering haze perhaps reminiscent of another state that of imminent collapse of the retinal cortex sending shards of pure unfiltered visual passion directly to the cerebrum as a cascading flow of neurons brings him back to the moment of impact… yes he DID get Cecil Taylor.

The phobia had begun many years previous when after repeatedly running across endless articles reviews critiques analyses raves rants and so on concerning the above said musician composer artist a instinctive knowledge that he SHOULD LIKE this man’s music exploded in his brain. Everything written every rumor every myth pointed to this inevitable conclusion yet after diving in headfirst on multiple occasions – it just did not work.

Now as he sprawled awkwardly in spasmodic collapse of his physical being the realization of the ecstatic pulse drew him in and commenced to HEAL HIM. Souls from iterations past swelled with fulfillment from the fruits of the sound. Pain transmogrified to unfiltered joyous awakening of all that transcended this and any other sphere. He arose with a jerk and stood once more poised for a leap beyond the beyond.

It only stood to reason that the music need to be turned up. Louder now the thundering chords shook the very air that surrounded. A smile broke his heretofore pursed lips as the last shards of “In It’s Brewing Luminous” side 2 faded to soft dark numinous cloud floating with a decaying hiss as the bytes flowed and numbers assembled to generate signal generating impulse moving through copper and silica to arrive at a reproductive mechanism so advanced as to earn the name speaker giving voice at long last to that which might be called on any other day in any other time – the next song.

Jad Fair and Kramer – how perfect, ecstatic Americana to follow the otherworldly dimensions of Cecil. Taking a deep breath he stepped back and settled back into the chair that only minutes before had skidded from his feeble grasp as he fell. Now the grip was strong again – perhaps it was time to put on some Peter Brotzmann…