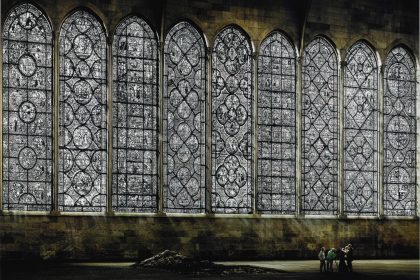 Upon opening the immense intricately carved wooden doors we entered a room in which the opposite wall was so afar it dissolved in bright light. To my right the entire length of the perpendicular structure was encompassed by row after row of peaked glass windows adorned with patterns so divine the eye could barely grasp. As we moved closer the sound of feet on the coarse and dusty floor seemed to disturb the embellishments – they began to blur and lines once laid merged to new form. Walking up to one panel I realized that the lines were not etched or applied, but living creatures seeming to respond to the sound of our movement. Constantly shifting, subtly rearranging into designs so many and varied it disturbed the eye to follow.
Inspired, I whipped out my phone and removed the handy bluetooth mini-speaker from my pack. Rapidly thumbing my library I found a seemingly appropriate test tone – Can’s “Future Days” and tapped it to life,raising volume accordingly.

As I had expected the window leapt to life in a swirl of movement. The Motorik beat began slowly as the song began to build from silence and the murmur of Damo’s voice began. By that point the swirls on glass coalesced and a design of transcendent beauty made manifest.