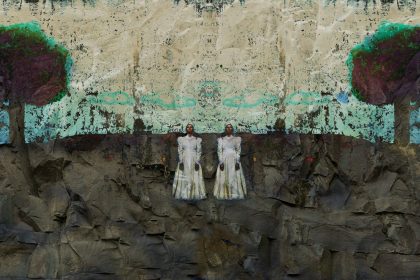 They stood in the center. Dead center. Of the field that is. Barren and dusty downright filthy. Yet there they stood, barely moving, just leaning gradually towards one another and chattering in strange voices high pitched and garbled as if in a language from another state of being. The heat warped the air beyond leaving no object visible yet a smear of color gave depth to their substance.

I stumbled forward a step hoping to discern their gibber only to find the sound becoming more complex as space compressed. With new proximity this nexus of tone took on luxuriant texture. Now a tapestry of cellular vibration taking hold of my consciousness and turning my perception of the figures ahead to that of a gnat afloat in the waves of heat above the two slowly spiraling down as the two dots that encompassed my vision became heads to bodies standing near motionless in a field devoid of any identifying features other than my presence and shared perception with my new found buddy, a gnat.