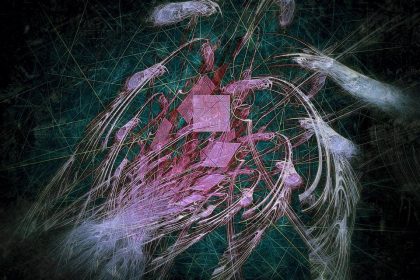 He took me to the end of the south field where, back in the far corner isolated from the primary growing areas was the test zone. As we approached my eyes attempted to focus on the life ahead yet seemed to suddenly lack the ability to grasp that before me. Allowing my gaze to flow across the lush growth it appeared to be grain, golden of a hue not seen before but rapidly mutating to shades unnamed at speed of perception all a blur in motion color shape and motion waving waves all translated to a smear of life and action in front of me. Geometric shapes seemed to manifest amidst the flowing thrush of growth, glittering through similar transitions of being and non. Looking to my host I stuttered “This…”

“Newest in genetically engineered trans-dimensional food like substance. Just started working with it in live situations this month. It allows the entity to feed simultaneously while existing in multiple dimensional states at once greatly enhancing the plants ability to absorb nutrients at a vastly accelerated rate. We can go seed to market in 3 days and are now programming it to be self-harvesting with the kernels dropping naturally into a specially designed leaf structure that captures the seed and drops it directly into a channel between stalks that flows directly to processing. Nearly labor free! We can lay off dozens of workers per acre for tremendous savings! At the end of its growth cycle it seeds itself and then the original stalk self-immolates leaving just a bit of ash to add nutrients to its offspring.”

A gust of wind blew through scattering a host of the geometric snowflakes off towards the main field to settle softly on the adjoining rows of corn. “Aren’t you worried about contaminating the nearby crops” I queried?

“Nah, Not enough to worry about.”

“Hmm…” Shaking my head as the corn shimmered and danced a quick jig. “Good to hear.”