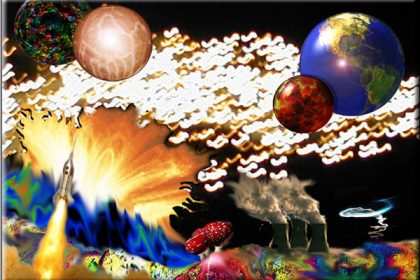 As the phenomena began to reach it’s apex few alternatives were left to us. All around matter was collapsing into light and space was transmogrified by some mechanism unknown into a viscous ooze which pulsated across time like some slithering serpent lacking distinct form yet confident in it’s presence as a last remaining anchor to some vestige of unifying theory of being. In a warehouse, deep in the bowels of the planet, there remained a dusty old booster; The Little Joe, long retired from it’s late ’50s role propelling test capsules into the void, was returned to service for one last desperate flight. A shot at salvation based on technology long dormant and a remaining skill set devoid of the expertise to truly take advantage of this last gasp. None the less all was prepared and a pilot was chosen to make the attempt at redressing the ills of being and stitch spattered reality back to some semblance of known. The vehicle was fueled and all prepared for the final alignment of signs to bear witness to this gasp for redemption. Upon the chosen moment all elements fell to motion as Joe rose towards a point beyond here but not to be understood as there. Stability was the reason, but is that a valid destination?