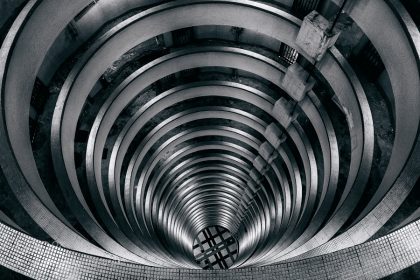 As we descended all voices fell silent. Only a thrumming pulsation could be sensed deep within the inner ear, a shuffle of small bones subtly shaken by frequencies too low to create a comprehensive shape for the mind to perceive yet possessed of a substance, though ephemeral in nature, which allowed the sub conscious mind to grab handle and ride the undulating wave of pressure which formed the aural track they now traversed. Deeper the craft plunged accelerating the sensation until almost unbearable in it’s intensity further enveloping the state of their very matter as it transmuted by alchemical means into a pillow of sound to capture them softly as they reached the journey’s end. Breath returning I gasped, “got a quarter? Let’s ride again!”