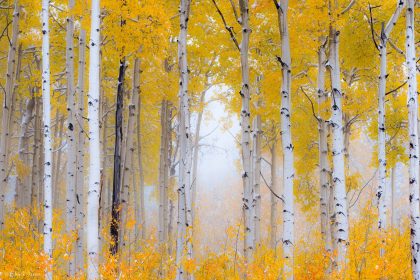 Congealing slowly to avoid any unnecessary pain from the transmutation I found my body enfolded in moisture. Head to toe a glisten in minute droplets, each uniquely refracting the soft light in a multitude of hue as if an explosion of rainbows emanated from my jeweled flesh. Around me was at first indistinct. A pure white fog floated inches above the matte of fallen foliage surrounding. In extreme contrast yet themselves so purely white as well, was a stand of the finest birch punctuated by an explosion of brilliance. Yellow as no yellow before, flowers aloft and between. A starkly defined yet simultaneously muted by the mist, alignment of difference that only seemed perfectly natural. Sitting to shake off the droplets I found them suddenly aloft. Through no effort of my own they had taken rise from my skin and clothing to sail forth. Quickly the droplets merged with the nearby flowers to be absorbed as sustenance making them glow even brighter. Now upright I began to move toward the stand of trees, stumbling as the fog obscured what lay beneath. Objects unknown could be felt slithering, crawling and grabbing on for the ride as I made my way. A sense of reunion filled my soul as if I had returned to a place of origin, a site of safety amidst the ether of time. Having arrived at a point within the wood perimeter I took quick stock of the situation. This would do quite nicely.