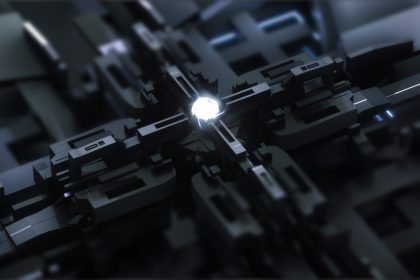 Gliding silently along rails so thin as to remain unseen to the naked eye, the four modules running in precise perpendicular relation to one another commenced the extension of their primary operational element, a slim, precisely aligned frame cradling an equally precise curve of material with the strength of atoms so finely placed at juxtaposition to one another configured with loving grace to interlock in a grip beyond our ability to understand. Simultaneously these four assemblies raced towards a destination who’s critical nature was only surpassed by the intellectual accomplishment required to render this state. At the center of this tableau a cylinder of detailed vaguely metallic but perhaps not material now undefined but in a shape so delicately executed as to give the illusion of artistry not known. At it’s top and center rose a smaller set of discs so thin so close to each that they appeared a solid rise. Yet through the micro thin spaces between these discs blared a light bright beyond a level perceivable to the human eye. The shine rose as a fluid mass oozing forth from the head of the column forming a perfectly spherical orb of pulsating anti-energy. Years of dogged development, theorizing, trying only to fail again and again was now culminating in what began to take full manifestation as the first transfer of black matter – anti matter to our realm in a fashion controlled to prevent the cataclysm that would result given an uncontrolled meeting of the two. Now arriving at their shared destination the mechanism oh so gently positions four segments now one surrounding by mere microns distance the presence now manifest. Using the natural force of opposition native to such matter and anti it allowed the orb to float in an absolutely centered state above the enclosure. You could hear the sound of held breath expelled. A roomful of scientists and technicians all in stasis as the event unfolded now allowing vital functions to resume given the mere fact that they had not vaporized in manipulating the base elements of being.