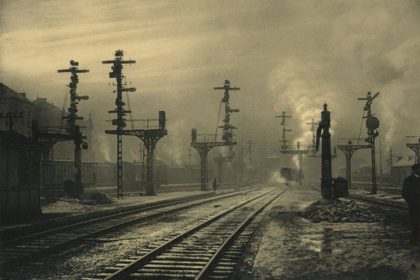 First fixated by the contrast, the array of texture, the sepia vapor which traversed a spectrum of density from translucent to billowed fog and noxious emission. Flow of rail, cross of tie, the precise latticework of signal towers, flickering light, utilitarian sheds and stops merged to form an instant of impression which would guide my perception of events yet to unfold. Anticipation, that of an oncoming locomotive, stack flowing with the undulating product of coal meets fire and the remains of that fateful encounter a spew. Enfolded by an air of expectation for possibilities offered yet not defined.

Anticipation became realization as the grind of metal dissipating the lubricant of speed to the grasp of friction brought the train to a shuddering stop just feet from the position on which I stood atop a small platform jutting forth from the decaying structure that once served as a point of departure for thousands of travelers over a score of years until succumbing to the inevitable creep and rot of time upon it’s being.

The engine was trailed by a host of tanker cars of varying shades from black to dirt encrusted tones muted by years of operation under the bleach glare of sunlight and the spillage of the corrosive elements contained within. In the distance the outlines of a caboose could be discerned through the haze. As the heat of the machine and the energy accumulated through it’s transit faded in waves rippling the air in visible representation of the power once aquired becoming power latent, simply a presence to be collected for some future expenditure perhaps to once again propel an immense creation of iron and steel to yet another destination.

Feeling my purpose was to act now amidst this set of evolving circumstance I searched my mind in vain for knowledge of what that purpose or action required might be. Coming to the conclusion that the preparation given me in advance of this moment in no way suited the actual needs of the moment, I sighed in resignation. Leaping down from the platform I hit the ground running as the need to escape a situation beyond my means overwhelmed the task as ordered. A voice from the locomotive shouted dismay observing as the reason for this manifestation of place, object and intent disappeared, a trail of dust settling so that only a snapshot of the moment remained.

Inspired by Image: Léonard Misonne is a Belgian photographer born in 1870 and died in 1943. Student, he took his first pictures in 1890. Games of light and atmosphere in this pictorialiste who practices the coal process since 1896. Member of the “Société Française de Photography “in 1912 Misonne travels through Holland, France, Switzerland, Germany and Italy. Between 1915 and 1935 he used the oil print.