First Trip To The Orient

First Trip To The Orient 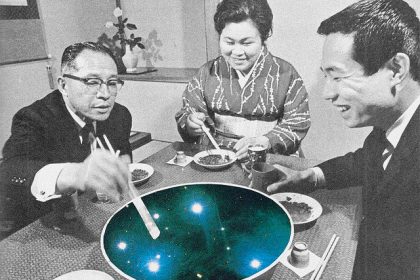 Upon arrival my host informed me that my initiation to Eastern Culture would begin post haste with a meal his mother, a woman of considerable skill in the culinary arts had spent the day in preparation. Tradition deeply rooted in the culture who’s basis provided the frame of reference for the particular consensus reality that held my presence for the circumstance I prepared to inhabit. This consumption of the base code for the identity represented in detail by the manifest beings surrounding would allow me an instant empathy, a direct connection to my new found neighbors.

Any reservations held concerning my ability to find comfort in the coming time abroad melted away as I found an instant close and respectful relationship with those who now would occupy my daily life. Smiling broadly I replied how I was flattered by his generous offering and happy to break bread with his family at first opportunity.

A short hop in a cab brought us to that point. Our destination in outward appearance, a Western style town home development. Perfectly parallel streets lined with compact kit built homes so exact in their repetition that they could easily have been rubber stamped in place. Subtly changing from one shade of mauve to shades of grey in perfect cyclical order to give the appearance of maximum diversity where there existed none.

The cab deposited us at the foot of three steps bringing us to that which served as Home to my host. Entering, we were greeted immediately by his parents, a lovely couple, polite and generous in their welcome. “Come, come!” his mother requested, motioning us to a table ready set in the midst of the room, low to the ground. Removing my shoes I joined them in cross legged on pillows surrounding to take part in a meal already highly anticipated and holding great expectation.

The mother reappeared, although I could not recall her leaving. Holding a large slope sided bowl steaming with content that smelled divine and surely the repository for a meal as none experienced previous. Carefully placing the dish directly in front of me I found myself gazing into infinity. The content was as no meal before. A pool of infinite depth and a list of ingredients endless in nature much less substance. It was a mixture of all that was, has been and potentially could be a swim in a broth of purest space dusted with the salt of time.

I was handed a large ladle to hold the honor of drawing the first bowl. With a swirl I dug deep and scooped a mixture which, if flavor matched the radiant spray of color and texture in it’s appearance was sure to provide epicurean delight. My host now stepped in to take the ladle and commenced to serve a portion to each of his parents and prepare one for himself. Now all sitting at ready, heads quickly nodded and appreciation for that to be received was muttered. As one we filled our spoons and joined as one to the fabric of the universe. It was at this point that a thought fleetingly slipped through my mind as it dissolved into the essence. Eat or be eaten, words to remember when attempting to snack on infinity.