In A Desert Land

In A Desert Land 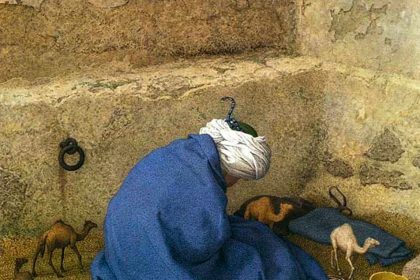 Days crossing the undulating waves receding to distance, forever exposed ablaze to unfiltered glare of the orb afloat at the point of horizon, projecting energy, vibrating at a frequency which generated light, heat and radiation of elemental substance. In turn bringing cellular mutation and destruction to any organic matter within unfortunate proximity to the source. Such a mutation I now took effort to locate with questionable intent.

Our party traversed the flowing sands as I held a watchful eye for the minute signs of a herd. Minute in that this was no ordinary herd, but one generated from the bowels of the immense assemblage that was the Bio-Form Repository, a place of accomplishment yet a center of horrors beyond the ability of those participating to excuse. Bereft of purpose, a place of creation for creation’s sake with no consideration applied to determine the nature of the conscious self awareness held by the result of these clinical origins.

Slip sliding to the space between dunes somewhat shadowed by the next in an infinite line of the same my eye took note of darkened bits differentiated from the sand surrounding by both size and shape of the tiny bits of dung amidst a flow of tracks quickly fading as the breeze threw fresh grains atop this evidence. Signaling to my companions for silence, I slowly crept along the path following the tiny hoof-prints forward. Suddenly they were before me. A herd of 10 or so perfectly formed miniature camels, necks stretching to a height of as much as ten inches each unique in shade from the largest, a true red eyed albino of purest white to the smallest of the lot, a pure black colt. They had gathered in what appeared to be the base of a small temple built among the dunes. A simple stone bricked square with three levels of carved step stone  bordering all sides. Every several yards a blackened metal ring was held mounted to the side of the first tier, seemingly points set for travelers to tether beasts of burden while taking sojourn at this place of mysterious purpose.

After brief consultation with my companions it was decided that the highest potential for benefit could be achieved with as small a disturbance as possible to these creatures accommodations. All drew back to establish a camp a short distance away, the other side of the closest dune. I would offer myself as a means of contact with the herd in an attempt to identify a hierarchy of leadership and establish communication in a play to establish a level of cooperation empowering to all parties.

Placing my mat of bedding down I unrolled it to lie in the corner, away from herd kneeling down to arrange my few possessions in preparation to take the opportunity for a short nap as the heat of the day reached it’s zenith. Best to conserve my energy for better utilization as dusk would bring cool to the dry desert air.

Bending forward to assemble a pillow from my bag of spare clothing a small serpent burst from the sand and moved quickly up the sleeve of my robe. Having no fear of snakes, my only concern was to evict the squirming presence from my clothes. This need became self fulfilling as the slithering blackness slid past my neck and settled satisfied in the folds of my turban. Simultaneous to this explosion of movement eight of the herd peeled off and quietly began to circle me seemingly at the lead of the albino.

The snake arose from it’s perch atop my head and hissed a rhythmic sound so layered in overtones it sounded a choir. The miniature camels seem to match the frequency of the pulse emitted as they accelerated  their cycle exponential with each turn faster than the last, the building force of movement stirring the sand to life as a cyclone rose from the dromedary spin to obscure my vision and lash my skin and eyes. Falling back bloodied and blinded I screamed for my friends as I scrambled backwards to avoid the now growing vacuum manifest from the mutant engendered circular generator threatening to engulf all existence with it’s growing power. It was too late. The increasing power drew all to it’s center. I felt the very moisture of my being torn from the physical elements which now, lacking ninety percent substance became dust to disappear in the bowels of the void.

As quickly as begun it now came to an end. In the place I once occupied there was only a serpent already returning to the sand of it’s origin. Former companions finally arrived only to see the tiny herd of camels trotting to the distance, having moved through space and time in a fashion that placed them a good mile away in the seconds past.

…and no one walks a mile for a camel anymore.