The Owls Are Not What They Seem

The Owls Are Not What They Seem 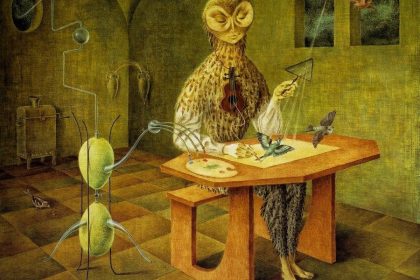 An alchemical amalgam of essential fluids, painstakingly extracted from select donors of the most appropriate bioforms, blended and aged to perfection in specially constructed native oak with carbon fiber weave barrels lightly smoked and set to mature just inside the tideline of a beach in a locale selected for the water’s particular specific gravity and precise saline content let to spray lightly over each vessel upon high tide on row after row of uniquely formulated fluids, once timed to perfection those appropriate to the construct in mind carefully tapped and run to the central feed-line which snaked from the refinery through the side window to be gathered in a crystal globe to cool to the exact temperature assigned necessary to assemble the task at hand. Once the needed level of incalescence was achieved a sensor valve at the seat of the crystalline ball slid open and the elemental material slid slowly to fill a dual chamber aggregate which formed the heart of this mechanism I had spent a lifetime developing; The ultimate means to manifest being from naught by strategically applying something to nothing until becoming. This mechanism, fondly known as “Bob” had been an extension of myself going on 23 years now. Ever providing the source from which my abilities were enabled to represent.

It was Bob’s ability to transmute the essential fluid to whatever color, tone, texture, matter, form or substance that was required of any particular project at hand which at this point in time perhaps independent of space happened to be yet another in my long running series of endothermic vertebrates; Birds, for an upcoming weekend event, one set to be epic in proportion and execution.

For this construct I required just three primary blends from which I would apply my skill and imagination to form through force of will the final outer decoration to my ready assembled flock. From the upper chamber of Bob three funneled stalks extended to place upon my pallet the selection of materials specifically extruded for application.

Taking the stylus from my custom built heartstring, careful to avoid any tangle in the undulating cord that controlled the flow from instrument to device, allowing just the right frequencies to pass unheeded to the point of the tool. Through the window to my left an unfiltered beam of purest starlight shone, to be captured by the lens held unmoving in my left hand. The focused sting clearly shone upon my current subject to proved precise guidance for my stroke. Dipping the stylus just so, I dabbed the tip with the first swirl on my pallet and using the light as my guide began to lay substance to skeleton. Simultaneously as timed in my preparations a breeze took form from same window and set the heartstrings to vibrate. As the tone grew, it’s energy began to ebb to the tip of the stylus and work began to flow.

After seconds of intensive concentration and furious activity the final touch was insertion of a small electric shock to the pineal gland upon which the bird, a blue, fluttered to life and sprang skyward to circle the room in a slow swoop, joining a rustic red and burgundy already in flight. The hum of the heartstrings reached a crescendo and as the breeze faded so the sound drained way. Both hands came to rest, lying their respective tools to idle, still dispersing vibration as the energy of creation ebbed. I too felt drained as the realization struck that the work of intention was in essence a transference of energy from self through object into being and in the process a portion of self was contributed to the act of generation. The final notes faded from the instrument about my neck and as I lay back to rest, silence was my bed.

“In order to see birds it is necessary to become part of the silence.”
– Robert Lynd

The Spanish-Mexican artist Remedios Varo (1908-1963) has a first name that means “remedy”. She was the best friend of the aforementioned Leonora Carrington, and participated in many practical witchcraft/pranks (one such prank involved mixing squid ink with tapioca and serving it to guests). Her artwork is noted for the fine detail and the fantastical postmodern allegory. Most of the subjects have Varo’s heart-shaped face and aquiline nose, and exist in contained, if fantastical, spaces.