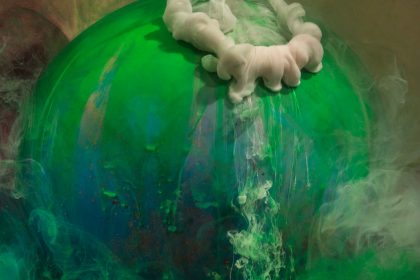 As tension between perception of what had, up to now been a widely held consensus reality began to fray and key principals upon which these perceptions were firmly rooted; Scientific conclusions based on repeated application of variables to establish a mean upon which theory, law and application could be derived. Historical memory painstakingly built from experience of the many distilled through a lens of distance allowing an emergent shared view of what has taken place, it’s context and lessons drawn from a convergent understanding of what has passed and motivations thereof. The people of the planet now were pummeled into action by loss of center – the loss of any cohesive connection between that which is understood by each other and the manifestation of being derived. It was now necessary to re-establish circumstance through which the dispersal of accepted being could be rebuilt to a new set of specifications calculated to produce a revised consensus to carry existence to a point further on down the road of implied (or at least, hoped for) manifest destiny.

To resolve the depletion of any and all natural resources, energy and sustenance it first required the creation of a parallel state harking back to a view of the planet long discredited. An immense, essentially infinite plane of being flowed from the emptiness of space to extend backwards to a point of entry and forward to an edge of departure. This new flat Earth quickly assembled substance to variegated landscape, providing land, sea and atmosphere above as the energy of the sun made it’s first contact and set bloom to the myriad organic elements rapidly finding their place in the new order of all things. Bloom rapidly split off to a multiplicity of form and mutation producing the first generation of that which would soon rule this flat subtly differentiated land. The many species rising – some evolving some not some fading to oblivion others taking stronger more diverse shape as they integrated with those surviving to enhance their movement up the forming food chain soon to define a new hierarchy of life for the world arrived. As it’s presence became defined the orb below which begat it’s being was enveloped in darkness, it’s surface becoming cleansed by mass extinctions and climatic chaos as it settled into an age of ice in preparation for a future planned yet still unfolding.

This flat land was a presence with a singular calling, that fore-ordained by those that passed at the prior state, a meme not present in the awareness of the forms populating this new world. The fact that all of existence was to one purpose only; The formulation and disbursement of substance to reinvigorate a world not of their knowing. To those many that now strode the land, forming teams, tribes, communities, nations and networks of interaction supporting this flow; They held no thought that the subtle downward slope of their world had purpose and that the continual movement of matter, both inert and organic, that embodied the presence of here was quickly bubbling over the point of departure and falling in a grand sweep that, in their vision, was simply a fading from view as the riot of riches generated by existence fell below the event horizon in this mode of being to boil beyond the edge and drop in the grip of the gravitational force exerted by the vast globe of the original planet below.

A massive vomiting of all that had become the new world above now spilled with a violence commensurate to the destruction of it’s evolutionary path. Void as it takes loss of the very elements that brought it’s beginning. As once below now so above. As it accelerated and progressed the land afar began to die and loose focus, dispersing into void. An ongoing orgasm of resources spilled along with the mass of energy engendered by it’s action to spill upon the orb below covering almost a quarter of it’s surface in impact as this concentrated matter merged to inject new life into the shell of the planet now in revival as it displaced the basis of being above to feed the vampyric thirst of the land that spawned it’s existence.

Simultaneous penetration of such a large proportion of the sphere created a funnel of downward force as the flood sought space for substance and gave presence to a circle of rising mist marking the path of entry with a wall evidencing the release of power as the delivery was initiated and made complete. The force of it’s sustained impact continued for eons until the flat world above dissolved back to the myth that begat it’s presence in time.

Like an organism brought to life the planet hungrily absorbed the impact and expertly applied it’s millennia of skill as a functioning satellite in a galaxy we called home to distribute the infusion specifically targeted to zones most in need of revitalization and nourishment. As the substances disbursed the additional element of the heat generated by the accelerated flow into the confinement of space, roiled the atmosphere to burst with vast electrically charged storms further flooding the land with new base matter.

Now combining electricity, heat, light and matter mutation to life began once more. Centuries past. Planning started long before bore fruit giving rise to a new race of sentient beings for whom an agreed upon consensual reality was achieved. A modern stable society flourished. Bored silly with the whole mess we decided to flush and repeat to see if we arrived at a more satisfactory result.