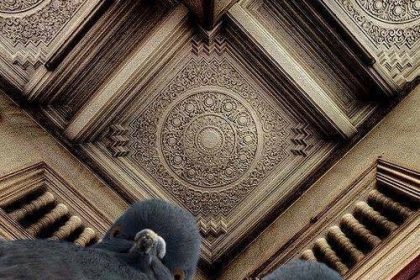 At this proximity my initial thought was smooth, not as a flow of neurons, but as a texture. That of the near twin bodies hovering above me as my eyes took focus. Breast feathers a puff, perhaps disturbed or perhaps simple in expression of disdain for the strange vision, myself, sprawled upon the floor on which they perched beak down with darting eyes aware of my every twitch. Obviously I had been judged of interest given their continued fascination. Adjusting my gaze from foreground to back the vision of exquisite detail and geometric perfection far above providing canopy to this space and a perfection found commonly in nature but not in application of the creations of modern man. The sophistication exhibited above me bore place in more ancient times when the value of a space was calculated on it’s aesthetic atmosphere as experienced by those that inhabited rather than the value per square foot as commercial development.

Shaking off this descent into thought of a particular pet peeve I hastened a return to the site surrounding to more fully grasp the dilemma now demanding action or movement of some sort to hasten a sense of momentum, provide subject to this descriptive beyond mere muse.

The bird to my left let forth a soft squawk, questioning, yet not allowing it’s accusing stare or guilt assignation of pointed beak to stray in the least. It was the combination of this dual  axis of force under precision that held me immobile yet able to grunt feebly in acknowledgement of this query.

I turned inward, attempting to recall the path that had led to this predicament. It wasn’t as if my being had suddenly manifest in this situation. There had been action, intent and circumstance that had led to this point. Locating the history of that which passed before seemed important lest my current discomfort be for naught. This seemed a terrible waste and a weight that I could not carry.

Introspect turned to anger and frustration at my inability to act, to move this situation forward, to initiate activity and development. Straining to jump back to a functional state only elucidated the passing of gas as bowels gave voice to annoyance with my situation. As the scent of my indiscretion reached the fowl observing, at last there was a turn of heads, a gaze sent awry. No longer a focal point my sense of restraint dispersed. Strength returned to my limbs and slowly I drew to my knees giving further start to my avian companions. Bursting alight, wings flapping the air before my face the pair circled skyward to alight one each in adjacent pillared windows.

A set of massive dark oaken doors were before me bearing the mark 111. Always adverse to sets of three I determined that this was not the way forward but a signpost to another destination. The birds above now began to squawk, the angle of aural refraction amidst the cavernous scope of the room creating an echoing cacophony escalating in depth and density as it rebounded through the space.

The power of sound drove me to flight. No longer concerned with adversity, I made for the nearest exit and yes, it was room 111.

Breathing a gasp of relief as the weight of the panel gave impetus to my tug swinging open enough for my hurtling self to pass. Light swelled to fill the room as I crossed the threshold, the door swinging tight as my hand slid from the handle. No longer in reach of the piercing sound my mind folded, flopped and pancaked back to reason as I spun about slowly in search of clues to my present whereabouts.

Perhaps six foot square, the room was featureless, white, unbroken by any decorative element or fixture. The light seemed to emanate from the very center of the cube yet no source was visible. The top of my head brushed the ceiling confirming my estimate of size based on personal height. Turning back from whence I entered, no longer a door, but just another side of a undifferentiated box. Slowly the room began to spin and build a momentum sufficient to pull me to the wall behind, centrifugal force remolding surfaces from angular to spherical, floor sinking to pit and ceiling elongating until the whole was akin to the innards of a perfect egg.

Transition achieved the cycle slowed and as the force abated I slid to the bottom as a translucent ooze commenced to emit from below me. Quickly, the vessel began to fill. I stood as the level of the viscous fluid continued to rise threatening to engulf my being. Gasping a last lungful of air I tightly closed my mouth as the goo encompassed my head to place me floating in a snot-like pool. Struggling to hold my last breath, consciousness beginning to slide away, a feeling of rapid transition jolted every cell of my being. As vision turned to darkness the final impression was that of overwhelming yellowness. A sense that all that was I now dissolved forming the central core of a new and vastly different life.

Two beautiful birds descended from the heights, one to settle upon the now gently pulsating egg centered in the finely woven nest of fiber. It’s mate positioned upon the edge of the shelter maintaining a stance against possible predators. Destiny would now be motivated from duo to trio in fulfillment of the transition from 111 to III and giving basis to adversity formerly held.