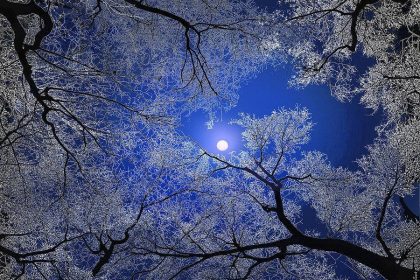 For the first time in days the mist receded and as a full moon arose the scene became one of surreal beauty among a reality of sheer horror. It was J.G. Ballard’s Crystal World become true, only with far less sophistication given the contrast of crystalline facets of perfection versus the smooth encasement of hardened resin that upon contact with our world catalyzed into a impenetrable totally transparent shell of all it touched.

Three days prior it had begun. Precisely at three AM GMT a shudder gave startle to an entire planet. It was like no Earth event passed before. The entire sphere of our planet literally convulsed as a sharp crack split the atmosphere asunder and the fog rolled in, bathing the entire surface of Earth, pole to pole, in a mucus like atmosphere that condensed quickly on all it fell upon. Once contact with native substance was made mere seconds passed until it became harder than diamonds. Utterly inflexible in being, affixing all in place as the resin became solid and stronger still with every layer that continued built as the mist commenced it’s swirl.

Life both above and below the surface of the planet ceased quickly as all source of the varied needs of sustenance sealed apart or themselves destroyed by the resolutely uniform surface that now embraced all. The present scene of sun glint delicacy witnessed by none. This failure of presence to give context to experience left a space of no reason with no intent.

Haze began to return, growing thicker within moments. Prior a vision of wonder, it now faded white ultimately to cease in an ignition beyond glorious. Now sealed tight, the molten core of the planet had lost any means to release constantly generated gas and debris born of it’s churning. As externally the orb was bound tighter each second, internally the pressure was escalating at a dangerous rate beginning a war destined to have no victors.

The sheath of ever thickening resin showed great resilience, holding with no sign of flux for two more periods of time growing or perhaps shrinking in duration, a definition for which no meaning remained. In the end pressure overcame stasis and impenetrable whiteness became speedily accelerating molten matter preceded by a hail of resin shards that, given any resistance gave tear to substance as the sheer velocity of their flight vaporized any element encountered.

Formerly an orbit occupied now a void, the sudden dispersal of a field of gravity now null gave collapse to the natural order of the celestial objects comprising the Solar System surrounding. Planets careened from long held orbits and rapidly disintegrated as the very forces that once gave shape and symmetry to their existence now tore them asunder.

The lone remaining element of this astral obliteration was the glowing orb at it’s center. The Sun still glowed bright amidst the destruction, now emitting geysers of gaseous matter outward as it’s immense gravity drew the remains towards itself, swallowing this fresh fuel to enhance it’s density and expand it’s burning surface area as the injection of purest fuel fed unto the core.

Larger chunks began to attract others slowly beginning to spin in a dance of joining, the process of building new entities already run unabated towards a revival of future potential and possible new history. Given that logic was left at the door at the start of this evenings’ affairs we can conclude that at this point the endgame is only that which you must imagine since I adamantly refuse to write it.