The Point Of Outside In

The Point Of Outside In 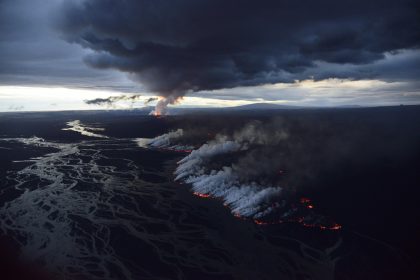 It began as a potential destination, dependent on that which was to come and if this possible action should compose itself at point X while factoring the dynamics constantly at play in this body cohabiting space in such a manner as to be water.

It was the point where that within held struggle with that without for domination of territory. Centered upon this node of existence, but possessed of intent to broaden whichever state holds triumphant to all existing within the province yet to be defined.

Leaving that decision to form as the eventual consequence of the current process seemed only natural given that knowledge that the nature of that form could not be judged prior to such consequence.

It began in the center of an immense ocean. A body broad and interrupted only by a jagged ridge of land jutting just beyond the surface so far distant that through the mist arising, as much a vision as reality. At this juncture where from far below bubbled a glowing undulating mass, liquid in state, but at a density and heat far beyond the water. Burst through, the heat of it simply boiling a path leaving the ever mutating core untouched by naught but the burning gases, themselves emitted as it burst to a surface. An interface ‘tween ocean and sky and the point at which jetting thrusts of lava fingers succumb to gravity to plunge back conjoining water and the gaseous remains spat out from these elements in a roiling broth of genesis.

Energy now took course as it dispersed from white heat to cool and absolute blackness. Glass hardened by elemental force now congealed and engaged with that about it in a ever growing mass as from below became above linked inextricably downward by the ever mutating latticework developing organically below in the roil of liquid, heat and abrasion.

Time passed. Evolution occurred. An isle of dark glass became an island paradise. A jewel encrusted in reds. blues, greens, yellows and every shade between. Light fracturing from substance to provide hue to all surrounding. Certain lifeforms began to achieve dominance and apply their concept of form, of function to the land and all that shared it’s sustenance. Others not suited to this application of standards began to fade, soon extinct and forgotten as eons passed.

Eventually, inevitably, the moment arrived at which the dominant species achieved a level of sentience at which the concept of legacy became a driving force in it’s every action and thought. Long known as a key signature. A point of decline when a society turns from focus on growth and change to that of recording what has is and what has been. The very act of documentation in and of itself becoming the means by which myth now became history and a multitude of independent interpretations became distilled to a mutually accepted and agreed streaming reality.

The arrival of the shared perception, an established history, now spiraling towards the onset of decay; During this passage of seconds, minutes, hours, days, years, millennia a multitude of activity and actions achieved form and fruition. This isle became a destination – a tale of a fateful trip.

Eons passed. Now in it’s dying days the sphere spun slowly, ever closer to the star that had brought it birth and sustained life long preceding. Ultimately, as gravity applied it’s ever increasing force to the orb causing it to lose it’s very form and burst into fragments, crushed ever smaller as mass compacted. Bits ricocheted off one another, some utilizing the strength of impact to carry them beyond the pull of gravity to sail outward to destinations unknown.

The concept of legacy long passed yet ultimately fulfilled when a passing vessel of sentient elements from a galaxy far away took voyage through this zone of debris. A star system collapsed. It’s substance fractured to a swirling cloud of multi hued cosmic dust. In passing one member of this crew of questionable purpose and place took note of a mote of matter circling outward from the mass. Utilizing the power of intellect the object was frozen in view for all occupants to examine, curious as to this artifact, remnant of that which passed before.

For this object, now imbued with meaning far beyond it’s substance or form, sole representation of all gone before now held for examination and interpretation which define forever forward this penultimate product of lifeforms beyond count civilizations without number technologies advanced and culture of depth and sophistication. The object was perfectly square and thin, near flat. Emblazoned with iconography unknown yet strangely alluring, a beauty flowing from it’s surface such that they had not experienced before. One side showed a slot it’s length hinting at possible content, resting inside. If only these entities gathered, riveted by this lone remnant of an era dissolved, if only they realized they had in their grasp a true rarity even in the time contemporaneous to it’s creation – a pristine copy of the original mix of the Grateful Dead’s second album, AoXoMoXoA…