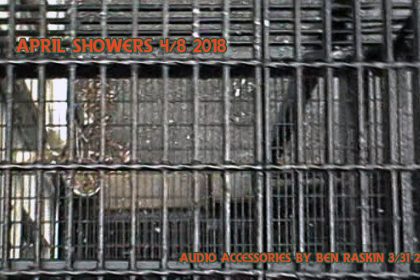 An absolute deluge of snow, hitherto unknown in such concentrated volume & impact and it’s substantial impact on a long familiar street corner previously immune to the catastrophic effects of the onslaught of climactic crises and their ongoing impact on society since the gutting of all regulation and protections by the travesty currently passing as the EPA. Drama builds relentlessly to the horrifying dash to safety by a family obviously already victim to massive deprivation and torture – sensing the potential safety of the streetcar pulled to it’s stop, they dash to board, unwitting of it’s true purpose. That of transport of its witless occupants to the nearby river-front plant from which shipments of neatly packaged individual servings in every available variety of current nutritional favorite among the working classes; Soylent Green. The horror of this moment shifts quickly to the nail biting scene of parallel parking, executed with minimal difficulty then shifted to a blizzard of dis-orientation and psychic terror as overcome by the power of the storm the video reaches a pinnacle of action intensity which leaves the viewer breathless with exhaustion as the frenetic activity draws to an inevitable and unfortunately, entirely predictable end.